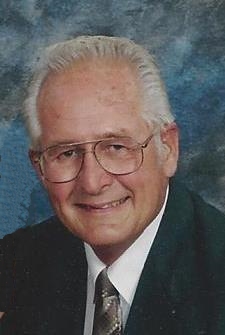 A longtime Tiro businessman and all around good guy, Bill was born on March 28, 1935 in Cleveland, Ohio to the late Richard I. and Eva E. (Berlo) Rhodebeck.  He was a 1953 graduate of Tiro High School and attended Wittenberg College. From 1953-1955 Bill was a member of the Air National Guard and was an Army veteran serving from 1957-1959. Bill and his wife, the former Evelyn M. “Sam” Fisher, were members of Mother of Sorrows Catholic Church in North Auburn until its closing, the same church they were married in on September 14, 1957. Bill was the owner and operator of Rhodebeck Sunoco Service Station in Tiro for 37 years. He was a devoted Tiro resident and was a member of the Tiro Volunteer Fire Department for many years and was a caretaker of the Tiro Oakland Cemetery. Bill loved his family, traveling, camping, going to casinos, and attending sporting events for his kids and grandkids. He was a member of New Washington Knights of Columbus, New Washington American Legion Post #405, Lions Club member, Shelby Cloverleaf Western Square Dancers, and was a former school board member for New Washington Schools.

Friends are welcome at the Turner Funeral Home, 168 West Main Street, Shelby, on Tuesday, March 26, 2013 from 2-4 and 6-8 PM where the rosary will be recited at 8PM. Mass of Christian Burial will be held on Wednesday at 11 AM at Mother of Sorrows Catholic Church in North Auburn with Fr. Eric Culler officiating. Burial will follow in the church cemetery with military honors provided by the New Washington American Legion Post #405. Memorial contributions may be made to the American Cancer Society.

To share a memory or express a condolence, please send an e-mail to: turnerfuneralhomeshelby@gmail.com